I spent my last day in Austin taking in the sights from the view of a borrowed 29er Kona Unit. The goal of the day was to roll a hundo but I ended up conceding to a mere 75miles, as the trails were a little more challenging than I anticipated.

There were a few cliff ledge trails I stumbled upon that left me fearing for my life a bit as I peered down the edge of the trail at the rock garden about 100 feet down…one slip and one could end up in a world of hurt.

In summary, my first trip to Austin reminded me that there are still places in the US where people are happy and have a healthy well-being. I had forgotten what a thriving and growing economy looks like. From my perception, it seemed that the people of Austin seemed to be financially stable and placed an emphasis on experiential based value (i.e. travel, cycling, hiking, climbing, contributing to community, etc.). In addition, it seemed that they consumed less than we poor Michiganders do. The city was making major strides to ensure a “greener” more sustainable way of living as well as placing recreational activities as high priorities. I would say that for every 1 car in Austin there is probably 2 bikes. Not quite par with Portland…but getting there. Its ironic, that while Michigan’s economy continues to plummet radically we still see the emergence of the wildly unnecessary places like the new outdoor Partridge Creek Mall, huge subdivisions with houses way bigger than we would ever need and with one entry layouts that resemble a rat trap. We have less, but consume the most.

Of course the legend, legacy, and claim to fame of Lance Armstrong is clearly present in Austin. As I rolled the group rides, I listened to many stories of local riders and there run ins with the cycling superstar. Everyone seemed to want to claim at least one degree of separation from the cultural icon…I’m not sure I can blame them. Lance has recently decided to open a new bike shop in Austin named Mellow Johnny’s. The shops intent is to promote bike advocacy and increased emphasis on making biking a primary tool for transportation, recreation, and maintaining a healthy well-being. The shop will feature lock and go cycling lockers for individuals who commute from out of town as well as showers. Although this shop presents a threat to the business of some pre-existing shops in the area, it seems the concept behind it is worthy.

In a nutshell, this cycling/companion reunion trip served as a great way to recharge my batteries and break free from my everyday mundane, routine lifestyle that I complain about but am not sure I could live without. I never thought I would make it to 29 years of age and still live in this area, it just didn’t seem likely or something I wanted to be in the cards. However, I can say that I love and embrace the cycling community I belong to. You guys all hold me up and keep me going…not sure I could find such a tight knit group in other cities. We all share the same passion and as a result, we are the minority, the black sheep, and the alternative. Our priorities lie elsewhere than driving new escalades, buying houses bigger than we would ever need, spending ludicrous amounts of money on ugly purses with gaudy letters on them, wearing our Sunday’s best to a smokey bar, and ignoring the fact that other cultures exist outside of the Metro Detroit Motor City. I take pride in my community…so lets all raise our pint glasses we busted our asses off to win in a prime at some local crit race to ourselves, “Who Cares? We’re Flying!”
Posted by Timothy Finkelstein at 1:56 PM 3 comments: 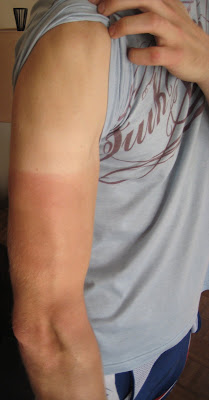 Sunny and in the 70s yesterday, you couldn’t ask for better weather…I even got to work on the tan lines a little!
Posted by Timothy Finkelstein at 9:15 AM 2 comments: