Always a Bridesmaid…never a Bride.

“You guys raced a great race, it seems like you did everything right in the break and made the Essex boys work to catch the front break…so how did we finish” asks Ray Dybowski. “Ummm…Danny took 3rd, and I took 5th…Cruise took a flyer with two to go, then Danny went, and after he was caught what I should of done was…” I replied. Ray abruptly rebutles, “I don’t want to hear about what you should of done…just do it next time, get it done next time”! Tough love.

So it seems that since Michigan road racing has swirled straight down the toilet for the month of July, racers are beginning to view Thursday night Waterfords as our best opportunity to go head to head with each other. This was reflected in this Thursday’s record 64 racers in the “A” field.

Race Cliff notes:
-Break stuck about 30min. into the two-hour race.
-We had Cruise and Cory represented
-Chase break formed with about 50min. left of racing; initially we had no one represented in the chase
-Danny and I bridged to the chase.
-Tim Saari gets dropped from the front break
-Bruce, Gilboe, and Terry P of Essex are represented in the chase break and the only team without a rider in the front break so the chase falls on their shoulders.
-After much hard work, the Essex boys manage to bring us up to the front group, which now has more WSC riders than any other team.
-With two to go, Cruise and Danny throw down back-to-back attacks that are both brought back in.
-Brian Adams takes a crack at it last lap and is caught by the sprint pack on the last turn.

It seems that this season I have definitely stepped up my game and effectively learned to read a race and consistently put myself in the breaks and in the position to win. However, my finish is a different story. I can truthfully say that I own the 4th and 5th spot at Waterford…I don’t think any other rider has more 4ths and 5ths than me this season. I am not proud of this; it is simply a reflection that I have to develop an effective and highly potent finish. 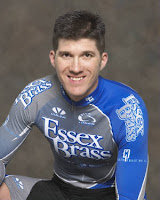 On another note, I have to give credit where credit is due. I haven’t given out a W.C.I.F. award in awhile and one rider in particular has stuck out to me in the past two weeks. Two weeks ago, Bruce Rivera won out at Waterford; we were in a 6-man break and he out sprinted the group. (*It is worth noting that I flatted on the last lap after 2 hours of breakaway efforts, also, a pack of push pins were found in Bruce’s car after the race…hmmmmm.JK) At the time I thought it was a good win but he sat on the break the last 5-6 laps and did very little work, if any. However, this past Thursday was a different scenario. Bruce was required to race a very defensive race and cover several attacks and put his nose to the wind, all the while still managing to snap around us. So reluctantly I have to give Bruce Rivera, a member of a WSC nemesis team, this week’s W.C.I.F. award. So lets all raise our gratuitously (arguably gaudy) vinyl sticker adorned, Zipp equipped bikes to Bruce…although you are our nemesis, you are this week’s recipient of the W.C.I.F. award.
Posted by Timothy Finkelstein at 11:14 AM 2 comments:

It’s not just the Motor City, but the Velo-City! 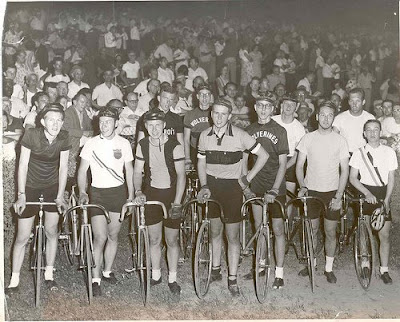 Once again, I have to prelude this entry by extending my sympathies to all those who have to work in the summer. The weather is so nice, the days are so long, the trails are so perfect, and no one should have to be cooped up all day working and missing out on the fun. That being said let me continue with how great my life is.

Next week I am going to head out to the Superweek Pro Tour. It’s my annual pilgrimage to all things fast, furious, and waaaay above my head…I love every minute of it! This year we decided to somehow signify on our team kits that we are from Detroit for just these occasions. After some interest developed by Made in Detroit, we threw their logo on the kit. In the past, whenever I have been racing out of town and people have asked me where I reside, their common response to my answer is one of a bit of shock and dismay. “Do people actually ride bikes in the Detroit area…I thought it was just crime and cars”.

I grew up in Michigan but never thought I would of actually ended up living here in my adult life, the resources are simply not the most optimal for my passions/interests. However, with the emergence of my interest in cycling I have come to develop a family within the velo-world and even more, a pride in where I live. 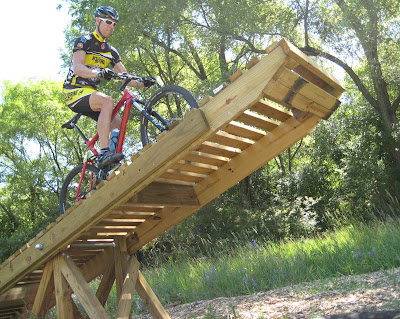 For instance, recently my Tuesday/Thursday two-a-day training days (track in the AM, Birmingham Worlds/Waterford PM) have morphed in three-a-days; track for breakfast, MTB trails for lunch, and a wholesome road ride for dinner. So it got me thinking…where else can you ride a world-class velodrome in the morning, receive world-class coaching, ride a new MTB park (new Stoney Creek skills park), ride well maintained single track trails in the afternoon, and then meet up with 70 of your best friends for a skinny tired slugfest through the streets of Birmingham/Auburn Hills or Waterford Raceway at night? 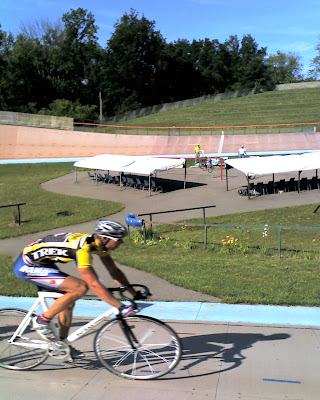 I’ve even heard testimony from fellow friends who have moved to places as extravagant as Boulder, CO but reported that although the riding itself is much better, the camaraderie and fellowship amongst the culture is not quite where our scene is.

The thing is, none of this is new. This has all been going on way before I got into riding or before I was even born, Detroit has rich cycling history. The Walden’s, the Young’s, the Andreau's, the Obermeyer's, the Wolverine Sports Club, the Olympic Medals, and the National Champions…the list goes on and on and continues to grow. The Dodge brothers were even cyclists! 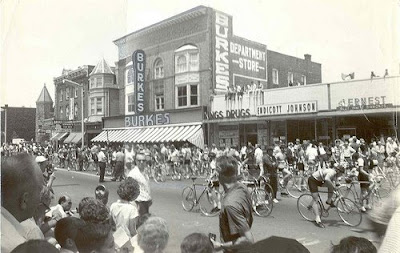 I live in Royal Oak, and on any given night I can meet up with my choice of 2-3 different group rides of varying ability levels…and these rides have been going on for years and years!

Earlier this week I ran into an individual on the Clinton River Trail who had just moved here from Germany. He asked about some group rides and I found myself rattling on an on explaining the wealth of opportunities we have to offer. He explained that he was quite amazed that we had so much to offer.

So for all of those riders who like to dwell on what we don’t have here in the Motor City, take some time to dwell on all the things we do have. MADE IN DETROIT: The Velo-City.
Posted by Timothy Finkelstein at 12:42 PM 3 comments: 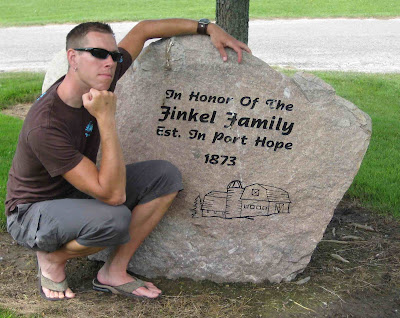 With my 2008 “target” event less than seven weeks away I decided it’s time to start focusing my workouts. To my surprise, my 2009 FOX RLC 100 F-Series front MTB bouncer arrived Wednesday after a true patience-testing 3 months of waiting. After installing this new beauty, I set the desired PSI and went to bed. When I awoke, I discovered the fork had lost about half its pressure overnight…bad fork karma I guess. 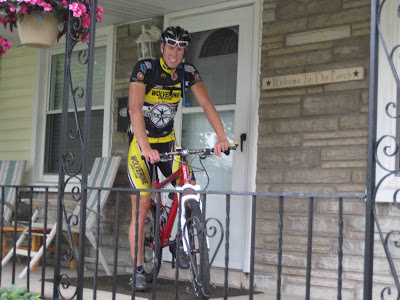 However, I did not let this little mechanical mishap set me back from the desired ETD for my excursion up to the tip of the thumb. 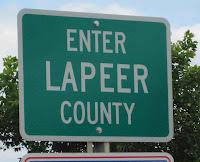 I’ve made this trek before on a road bike. However, this time I decided the weapon of choice was my Top Fuel and the road of choice was dirt.

Epic destination rides have a much different feel than loop rides. When you set off you have to mentally segment the ride or the overwhelming time and distance will quickly eat away at your psyche and you could go into survival mode, get a feeling of strandedness and start cussing at the sky. 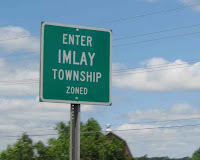 Unfortunately, I was inflicted with a 25mph headwind the ENTIRE way. At many times it was a battle to simply keep the wheels at 15mph. I tried to tell myself that this would be great mental training for the 24-hour race. When I was training for a marathon, back in September I once said that running is merely training yourself to sustain an annoying level of discomfort…you don’t really turn yourself inside out or dig way deep into the pain locker. Unfortunately, this training ride was much like training for a marathon.

For those of you who don’t know, the farm roads of the Thumb are painfully/mind-numbingly flat, filled with high winds that carry the pleasant stench of cow/pig manure, and offer a variety of dogs of all shapes and sizes that have been waiting their whole lives for some spandex clad idiot to roll by their guarded homestead so they can chase your ankles for several miles all the while barking a creating a scene that Old Man Withers watches from his window only to retell the story of the spandex clad idiot who rode by to every local affiliate within the town. In many ways, riding through these areas almost makes you feel like a space alien when the local slack-jawed yokel folk stare at you in complete wonderment when you roll by. 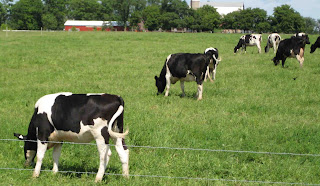 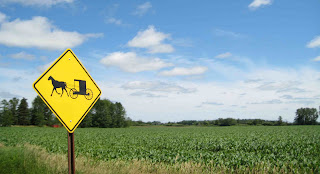 How's this for postcard fodder!...Amish country baby! I was wishing oh so much to get into an all out city limit sprint with a horse and buggy with Ezekial or Jebediah at the reigns but it never happened. 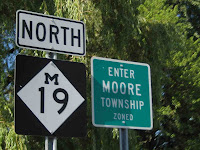 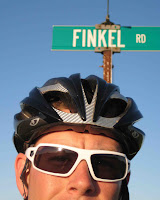 This is no joke, my parents live right off of Finkel road...actually named after my ancestors.


Total Distance: 136
Total Ride Time: 8hr 38min
All in all, the trek was very worthwhile. The rewards included great race training, quality spent time with the Fam, additional daily long rides throughout the weekend, participation in a parade, and homage to the land of Port Hope where virtually all of the Finkelstein heritage can be traced back to. 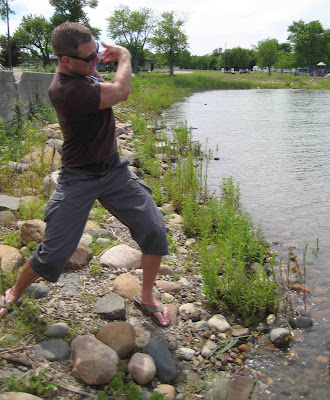 Skipping rocks is the ultimate soul soothing activity until you throw your arm out. 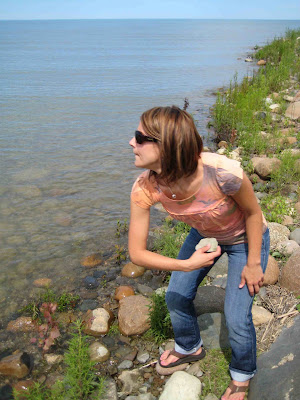 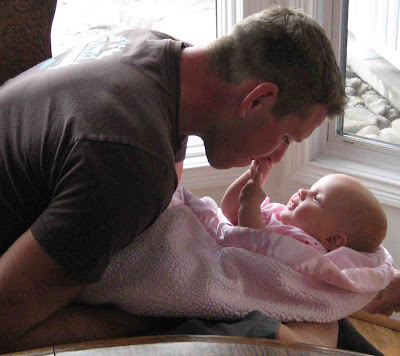 A special moment with my new niece and Godchild. 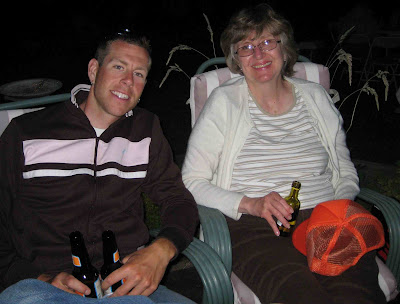