In life and in bike racing, adaptation is a skill that can often lead to success. 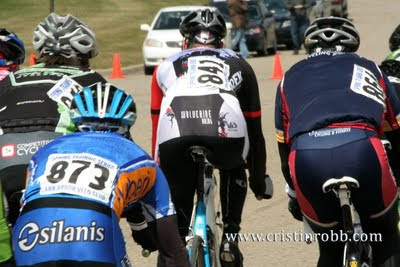 Just before the season started rolling, knowing I was in decent form, I decided to set a goal of winning the Michigan Spring Series. Winning the opening race at Waterford Hills sparked confidence and intensified my motivation to want to continue to do well in the early training races. Furthermore, my consistent podium finishes had me sitting content with the belief that mathematically I had already won the spring series. 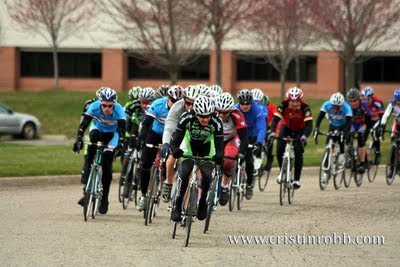 Sometimes it’s hard to hit a target when you are aiming at the wrong one or without knowledge of the target all together. Such was the case with my standing in the STS overall. In the past, the STS was always based on a racers finishes at Waterford coupled with the Ann Arbor races. However, I was unaware that this season the points were based on the Ann Arbor races exclusively. Having finished in 2nd place twice in 2 of the 3 races leading up to the finale (I missed one when I was in NC), I became aware literally minutes before the gun that I was only leading the series by a mere point. What was expected to be a laid back day of racing in which we planned to try and set another teammate besides myself up for a win, turned out to be a title battle. 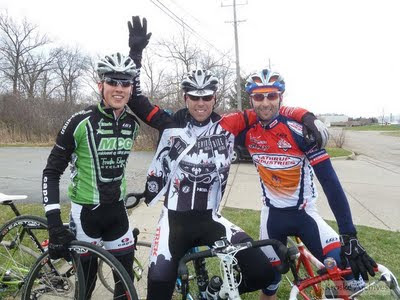 Robert Foshag, of Lathrop Industries, and Vince Roberge, of Trails edge were both tailing me in close second for the series title. If either of them finished in front of me, the 3 year running streak of the Wolverines would come to an abrupt halt. Both Robert and Vince are riders who I look up to and respect greatly. Also, both riders’ skill sets can be quite a handful to deal with when going up against them in seclusion. Robert Foshag is an all around strong rider and has a vicious finish when the line is in sight. Vince, just as he proved last week, is capable of motoring away from the field never to be seen again until after he crosses the finish line in front of you. Needless to say, I lined up on Sunday knowing that I had my work cut out for me and that I needed to be crafty. 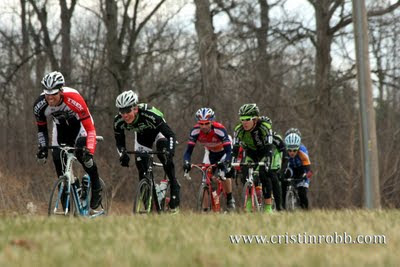 After a short team meeting just before the start, we determined that I did not have to win the race but simply ensure that neither Vince nor Robert finished in front of me. Both riders had a strong team surrounding them. It was incredibly windy and Ray suggested that I make sure I stay near the top wheels right from the gun because the selection was going to happen quickly. 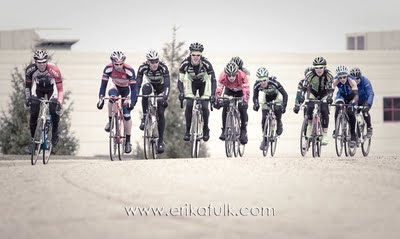 This is one of my all time favorite racing pics. It looks so ominous and tells such a great story!

Ray’s advice proved to be very valuable as the break of 8 riders or so quickly developed in the first two laps. I was fortunate to make the break but was without any teammates. As I looked around at my break mates I realized that all the players of the game were represented. I couldn’t help but be filled with exhilaration and anxiety of the heightened healthy competition. Albeit nothing more than the Michigan Spring series, this WAS what bike racing is all about; anything could happen from that point on. 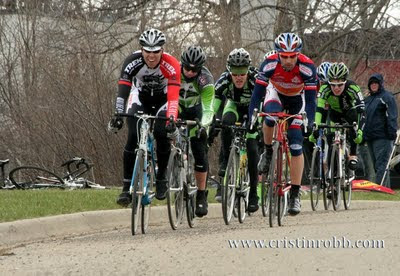 The break quickly started lapping some of the fragmented field which made for a lot of confusion and congestion. There were many attacks and cat and mouse antics that played out but the main break managed to stick together coming into the final 5 minutes. 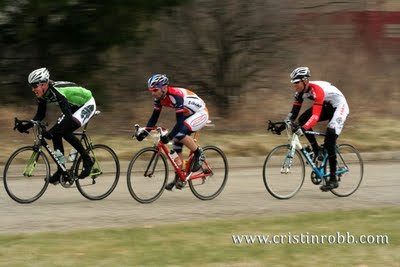 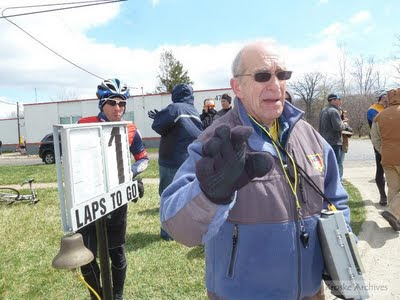 As we were lapping a group of riders, Paul rang the finishing bell. There was much confusion in our group as to whether or not this was our finishing lap. However, no one was willing to risk it, so we treated the lap as if it was the end of the race. Vince attempted one last TT to the line but Robert and I followed. As we made our last left turn with the line in sight, I was sitting comfortably in 4th wheel. I saw Foshag get pinched into the curb on the left side of the road and I hit the gas as hard as I could toward the opening. I crossed the line and threw my hand in the air only to find out that Paul was simply finishing the field early and that our break still had 2 laps to go. 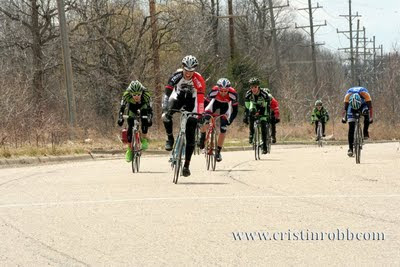 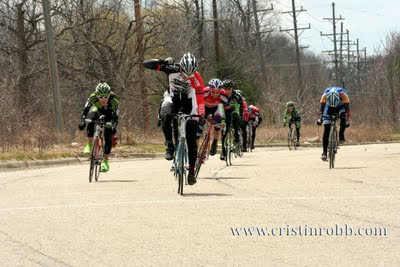 The first and fraudulent sprint 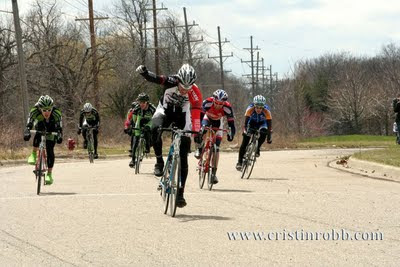 I was gassed from an all out finishing effort but had to quickly recover and put myself back in the mindset to do it all over again in two more laps. Luckily I was able to muster up one last good finish and crossed the line first on the day for a second time.

After the race, Ray said to me, “Tim…I’ve had to win a few races twice in my day as well. That was pretty freaking awesome.” I take great pride in helping claim a fourth year STS title for the Wolverines!

I can’t help but feel very satisfied with the early season success I’ve had. I equate it all to a natural defense mechanism that may be sub-consciously or consciously taking place in my head. I’m getting married this summer and with that I recognize that I will have to make many personal sacrifices in the future as I start a family. Also, the welfare of my job looks more dismal each day. Perhaps part of me wants to cling onto the small and romanticized hope that possibly I could do this for a living for a few years. However, the saying goes as follows:
Do you know how to make $1000 bike racing?
Answer- Start with $5000 at the beginning of the season.

No matter how unrealistic the goal of being a salaried professional bike racer may seem, I’m hard pressed to think that it is not a common fantasy of most every racer that lines up week after week, year after year all around the world. Sometimes I analogize it to my high school students telling me, “I want to be a video game tester when I grow up.” My usual response is, “good luck…get in line”. Whenever these thoughts seep into my brain I have to take my own advice. Besides this is all just for fun, the struggle is part of the appeal.

A racer is only as good as his next race. I’m keeping this in mind as the “real” season nears. But for now, I’m pretty happy with the way things are going. Also, I’ll be pretty happy even if the season doesn’t yield anymore results for me. I have a lot to look forward to. 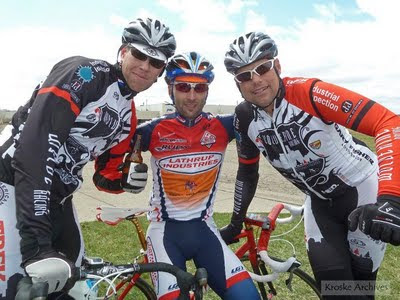 A special thanks goes out to Erika Fulk, Cristin Robb, and Scott Kroske for consistently doing a stellar job of documenting all of these races. While I am extremely grateful of these pictures now, I know that 50 years down the road they will be of great value to me. Thanks for selflessly capturing so many cherished moments for so many people!
Posted by Timothy Finkelstein at 12:09 PM 4 comments: