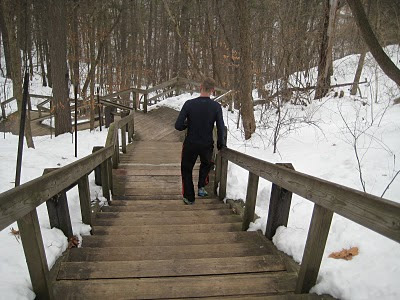 This past Thursday was my 32nd birthday. As cliché as it is, I've always found celebrating birthdays to be a little weird in the sense that it is just simply another day unlike any of the rest. However, as I get older I have been warming up to the idea of how important it is to honor a person's life here on earth. While we can do this on a daily basis, it's nice to pick one specific day out of the year to ritualistically do this.

On March 3rd, 2009 my identification with my birthday was permanently changed forever as I answered the call informing me that my brother had been rushed to the hospital. It had been a pretty good day prior to this call. I had squeezed in 5.5 hours of training on a work day and had even had a few minutes to crack open a celebratory beverage with Angela.

At my brother's funeral I stood before a filled congregation a read the following words as a part of his eulogy I prepared:

My brother was called to his heavenly kingdom on my birthday. He and I will now share a day every year that we can celebrate life together. I will celebrate the life my brother led, and celebrate my own life in which I'll strive to follow the footsteps and examples laid before me by my brother Don. I am honored to have this day with my brother.

Despite my feeling of honor to share this day with my brother, I found myself filled with anxiety and many indefinable emotions as my birthday approached this year. Initially, I didn't even want to acknowledge it and preferred to honor the day as being my brother's day only.

I have this personal practice in which I like to perform some sort of act to truly make me appreciate life and remind myself of just how alive I am on my birthday. We all do this, whether it's 50 laps of the Champs Elysees on our 50 birthday, or 21 shots on our 21st birthday. The act of recognizing a person's day they were born is a way of celebrating their continued life in this world.

For the past two seasons I have been running the stairs at Bloomer in the off season as a plyometric exercise to increase leg strength but also my ability to suffer. The stairs are 190 steps of lactic acid inducing pain. These workouts always prove to be a great source of suffering that’s on a different level than the bike. Inspired by the hour challenge first introduced to me by Art Fleming and Mike Simonson, I decided to attempt 32 reps of the bloomer stairs as fast as I could on my 32nd birthday.

I was seeking a cathartic experience to help make sense of my newly defined notion of what March 3rd means to me now. I wanted to suffer to be reminded of just how alive I am. I wanted to be thankful for my ability to simply push myself to the edge and achieve a tangible goal. I wanted to honor my own life by finding strength in pain. I wanted to make myself proud by doing something that would of made my brother proud.

Although this quest was completely brought on by my own choice and initiative, I found myself riddled with anxiety to the point of a stomach full of nerves earlier in the day as I reflected on what lay ahead of me. 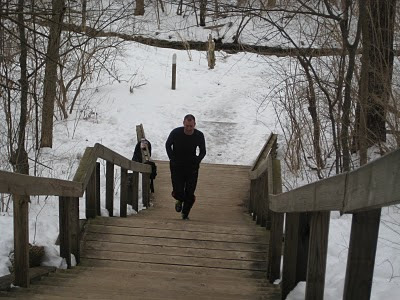 So after one warm up trip up the stairs to get the tally going, I started the clock and began to tick away at attempting my goal. I must admit it was extremely mentally daunting after the first 3 reps, already redlining my heart rate, knowing that I had 27 more trips up the stairs. I started with music to keep me motivated but found it to be a distraction after about 5 reps and decided to bail on it. The next few reps I tried to focus on my motives for attempting this. I tried to fuel myself on emotion but this only lasted so long and I started to stagger. It wasn’t until I was able to silence my mind that I fell into a good rhythm.

I eventually made it to 32 reps and within my goal time. I sat on the stairs stunned, still suffering, and reflecting on how alive I was in that moment. 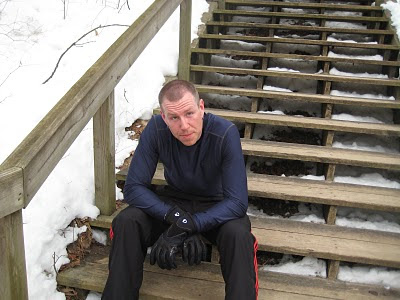 The goal was not about the physical accomplishment of the feat but rather the metaphorical significance that came through the accomplishment. I wanted to find strength in pain. At one point, I met what I thought were my limits but I strived to push through them and did. There have been many times in my life I've attempted this and failed.

As I laid down that evening, I was able to find peace with the day and honor two special lives.


Specials thanks go out to my future sister in law who had accompanied me to the stairs that day to help with motivation and my pacing. I doubt I could of kept going as hard as I did without your presence to keep me honest and push me.
Posted by Timothy Finkelstein at 4:51 PM 2 comments: