Come help celebrate my last year before I can race Masters 30+ races.
Everyone's Invited!!!
Where: Dick O Dows in Birmingham (One of our teams new sponsors)
When: 3/1/2008 8:00pm

Don't live a life of regret...be there.
Posted by Timothy Finkelstein at 5:17 PM 4 comments:

Ben Renkema, former teammate and good friend, as he snags his first ever National title at Downers Grove in 2005, quite possibly one of my most favorite cycling photos of all time! Also, John Coyle, current teammate and Olympic medalist is to his left. Ben is featured throwing up two fingers on each hand for what I assume is representing his State Title he claimed just the week before and his newly claimed National Title…or it could just be promoting peace in the Middle East, I never really asked him straight out. 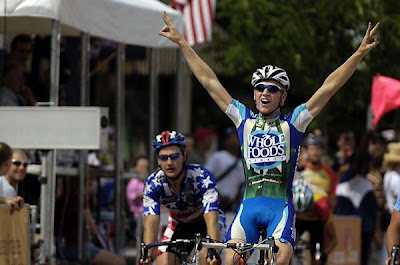 Ben is one of the few riders I know who has the apparent skill, drive, and talent to take his game to the next level. I look forward to seeing how his season develops this year as he makes the move to his new team TURIN, and to take pride in claiming that I at one time, shared a bed with him while on the road at Superweek.
Posted by Timothy Finkelstein at 1:10 PM 13 comments: