Today was another one of those days that served as a clear affirmation that I am not content with living in the metro Detroit area of Michigan. 73 degrees and sunny was the catalyst for a beautiful 73 mile loop in which we never saw one traffic light. 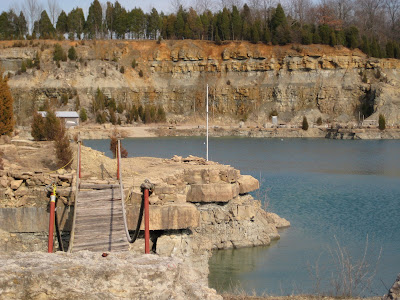 Danny suggested a few days back that we roll through Scott McLarty’s homestead on the way down to Georgia. The rationale was to get a few days of rolling hills before we punish our legs with lactic acid in the mountains of Northern GA.

Scott, former Essex Brass Teammate and Berkley resident, recently relocated himself and family to Louisville, Kentucky. I must say, he was a great tour guide and pitched a pretty convincing sales pitch that Louisville is one of the Nations best kept secret as far as cool cities with a powerful cycling presence goes. Louisville hosts some of the reputable teams such as the Texas Roadhouse boys, Barbasol Cycling Team, and the Papa John’s Cycling Team. He informed us that the Master’s Nationals race will also be hosted in a nearby park by his house. Upon hearing this news I quickly made reservations at the McLarty household for next years race, as I will be celebrating my first season that I will be eligible for a masters race. We were very grateful for our decision to pay pilgrimage to Scott and this town when, upon completion of our day of riding, we returned to an extremely tasty home cooked meal. 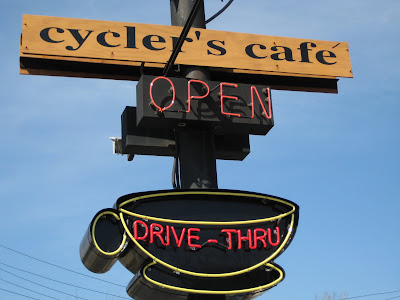 Prior to our ride we stopped by a small shop named the Cycler's Café. The shop was unique because it was also a burrito/beer/coffee shop. We strolled around the shop for about an hour kicked some tires, and treated ourselves to a pre-ride burrito. The shop proved to be magnificent marriage of all things cyclist love.

Whew! Just scoped out the current weather status back home. I am definitely not regretful that I left the Motor City behind this spring break.

We are going to get one more Louisville ride in tomorrow before setting sail for Helen, GA where it will literally all be uphill from there. Details to follow…
Posted by Timothy Finkelstein at 7:19 PM 5 comments:

Georgia on my mind

Tomorrow I will be leaving for my third annual training camp in Georgia with none other than Mr. Danny Klein. We plan to meet up with the likes of Scotty Hes, Soupy Campell, perhaps Ben Renkema, Greg Christian, and some other unknowns. It should be a great week of training, resting, and eating. Details to follow as they develop.
Posted by Timothy Finkelstein at 3:02 PM 3 comments:

I defy you not to shed some tears...

For those of you who have not seen the preview for documentary: The Club of Champions yet...check it out! You can all look foward to a VIP viewing this fall in the outdoor venue of The Stein Theatre.
Posted by Timothy Finkelstein at 2:57 PM No comments: 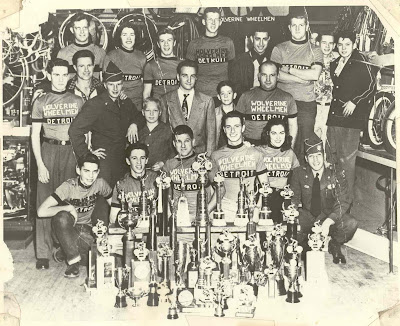 Have you ever been a part of something and not fully grasped the immensity of it or the significance of its impact on your life and who you are until after the fact? All too often I have not been able to realize the value of an event, person, place, or thing until it has came and went. It seems that I can get so caught up in an instant that I am incapable of taking a step back and really realizing what is really happening. 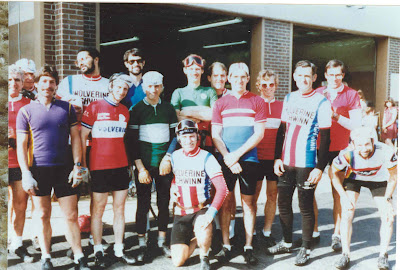 Through a series of events that have all built on each other in the last week I have come to a distinct personal realization of what it means to belong to an organization with the history and distinction of the Wolverine Sports Club. I have been a Wolverine for 4 years now. Sadly, I admit that my initial draw to the team was the romanticized luster of such a reputable title sponsor as Whole Foods Markets, the fact that our jerseys read WOLVERINE boldly across our butts meant very little to me. As time went on and I listened to several Dybo memoirs I began to develop a sense of pride in the history of the club. However, I never really grasped the enormity of what it all means until this past week. 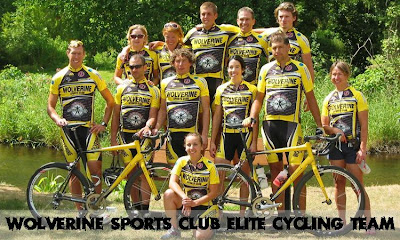 On Monday, last week I stopped by ACF to drop off a few things to Cullen. While I was there he showed me the preview to the documentary: The Club of Champions. This is a film by Richard Noiret that is going to tell the story of the success of the Wolverine Sports Club. It was only a three-minute clip, but those three minutes were enough to give me the overwhelming feeling that this club is much bigger than me and I am honored to be a part of it. In addition, Cullen gave me a disc of over 200 photos from the club dating back to the 1950s and before. I brought these photos home and studied them…I think I looked through them all about 20 times in the next few days. I looked into the eyes of the Wolverine greats such as Claire and Shelia Young, Mike Walden, Dale Hughes, Frankie Andrieu and his sisters, Bob Travani, and many others. It was surreal to think so many great things occurred before I was even born. I tried to wrap my head around how I fit into the picture of the oldest cycling club in the USA and the one who has single handedly produced more National Champions, World Champions, and Olympic Medalist than any other club.

These above thoughts were running through my mind as I headed up to Rose City this weekend for the 2008 Wolverine Training Camp at Dean Arbor’s (Dybo’s Father-in-Laws). 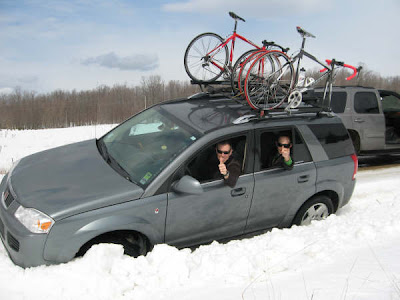 The camp started off a little rocky. I drove up to the cabin with Alen Smith and Angela. As we rolled into the mile long driveway leading to the beautiful and enormous log cabin we were as giddy as children running downstairs on Christmas morning to get that first glance at the tree. Our anticipation was quickly interrupted by the shock and realization that we were no longer in control of our vehicle and was sliding quickly into the ditch. Just after our momentum came to a stop and we realized we were stuck, Angela read the email Ray sent out earlier that week describing the directions to the house and posting the clear warning to be careful in the driveway because WE DO NOT WANT TO PULL YOU OUT. It was sweet irony. Luckily, John Sammut and his trusty set of tow cables were able to pull us out quickly.

This small hiccup didn’t even get in the way of us putting in 70 miles that afternoon. On the ride, something happened that sparked the first in a series of serendipitous yet kismet events for the weekend. As we were finishing up our ride a car rolled by us very slowly on a climb. After the car passed us, it quickly sped down the road and turned around at the top of the hill. Unknowing of the malicious capabilities of the teeth deficient hillbillies that inhabited this area, our groups was braced for the worst as the car rolled slowly up to us. Much to our surprise, the car contained two females who felt it necessary to grace us with the bearing of their chests. The group roared in jubilation…tears of joy and relief were shed. Dybo quickly commented, “I probably have a lifetime mileage of about 500,000 miles on a bike and THAT has NEVER happened!” A series of high fives and “Ohhhhh Mans”continued as we finished our ride. 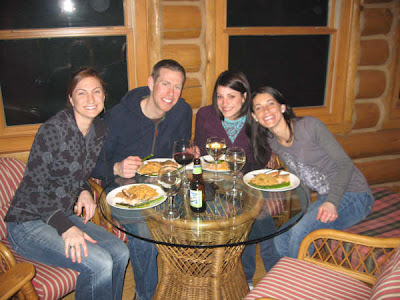 There are several schools of thought on the following subject: Training Camps- Wives/Girlfriends invited or just guys? After this past weekend I have come to the very clear realization that given the appropriate accommodations (i.e. a log cabin approaching 4000sq. ft., two kitchens, and hot tub) bringing wives and girlfriends is the best thing a guy can do! 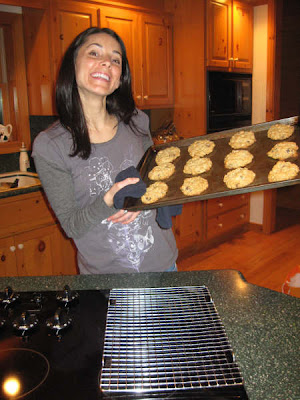 We were graced with the beautiful presence of Angela, Aimee, Sarah, and Megan. Not only did these women serve as the perfect ornamental additions to an already beautiful cabin but also they cooked, cleaned, and rubbed our sore legs post ride. They all get the MVP teammates this past weekend. 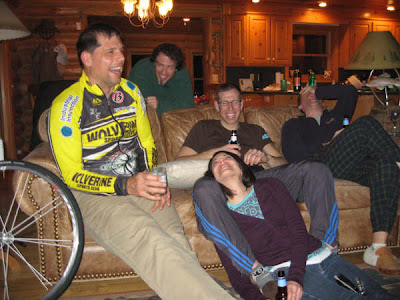 If I could have one day I would have to replay for the rest of my life it would have to be this past Saturday. It started with a great hearty breakfast, followed by a 100-mile road ride that I felt great on, and ending with a dinner waiting for us upon our return. The evening was perfect, filled with wine, Sarah’s amazing cookie baking skills, the camaraderie of my team, and the feeling that only a women’s touch can give you. This feeling beat all the nights that were spent in Super 8s on the road sleeping 9 guys deep in a 2 person hotel room trying not to choke on the stench of farts and dirty chamois. 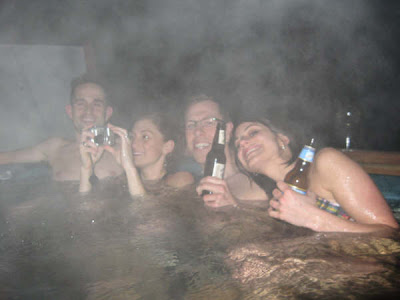 All of my most favorite things were in one place this evening and I was loving life! If I were somehow able to bottle the feeling I had that night and sell it as a drug, it would easily overtake heroin, cocaine or any other artificial high out there. 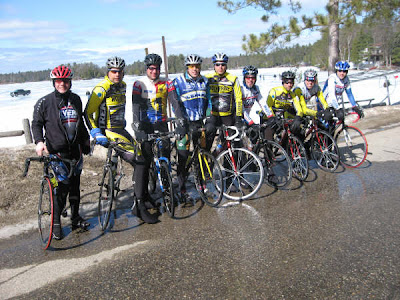 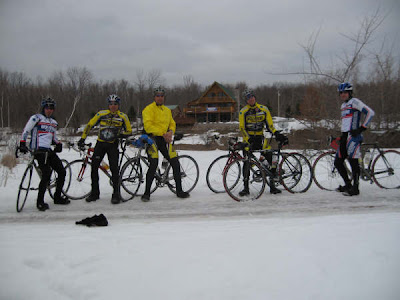 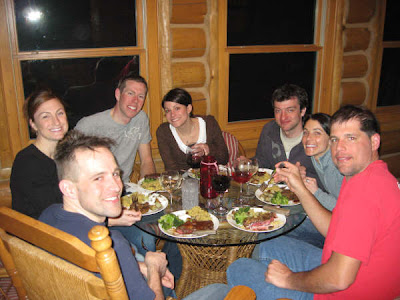 Sunday morning we made a huge steak and eggs breakfast, rolled out for a quick few hours to get just enough mileage in to say we did just over 200 miles for the weekend. We all had to head out quickly in the afternoon to make it to the Annual Wolverine Sports Club Banquet at the Detroit Yacht Club that evening. As I drove home and replayed the past week and weekend in my head; I was able to take a step back and really think about what has happened here. I have become part of a long tradition and history of a great club and organization. This is a very special time and many special things are happening that will leave a lasting effect on myself and everyone involved and I am truly thankful to God for me being able to be a part of it. I LOVE THIS TEAM…I LOVE THIS CLUB. 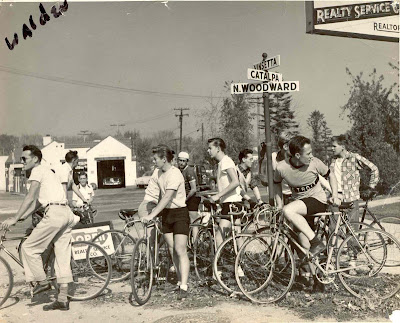