I'll keep this short and sweet. No wind tonight, so it kept the field pretty fast and did not allow for much breakaway potential. However, we tried our best to keep the WSC cannon firing. Many breaks (solo and group) formed throughout the race but nothing materialized. Luke Cavender took all four primes the race had to offer as well as a solid 3rd place finish. Scott Kroske sprinted himself to a nice 5th place finish...Sammut a 7th, and myself somewhere around 8th. Overall, it was quite a fun race that allowed the squad to get experimental with some moves.

The post race was topped off with one of my legendary "sexy dances" in the parking lot, which drew quite a crowd of women. Pictures and video are soon to come! To be continued...
Posted by Timothy Finkelstein at 3:21 PM No comments: 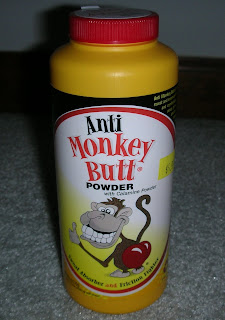 If any of you out there know Scott Kroske, you know he is quite a colorful character (I say this in the highest regards). Well, it seems Scott can sometimes develop some undercarriage problems. Tonight, prior to the Stoney Creek group ride, Terry Palmer presented this thoughtful gift to me to deliver to my fellow WSC comrade. So enjoy Scott, it will be hand delivered (but not applied!) in Canada this Thursday.
Posted by Timothy Finkelstein at 8:07 PM No comments:

Hurt so good…come on baby make it hurt so good…sometimes Cone don’t feel like it should!

This year, Cone Azalia was relentlessly difficult. The wind was very strong from the east making the finish hard to just keep it at 20 mph. The dirt sections were moderate, with the exception to a few very pothole filled areas. The field had some serious horsepower in it. Some notable names included Jake Rytlewski, Kirk Albers, Paul Martin, The Abercrombie squad, Texas Roadhouse, and Priority Health.

The attacks began at the very first dirt section and never stopped until the field was shattered. Two laps in I looked around and found none of my teammates anywhere in sight. I felt like a soldier in enemy territory with no allies. Shortly after, I suffered a few mechanical difficulties. My right speedplay cleat loosened allowing about and inch of forward and aft float until the end of the race. Also, while in the second dirt section, I hit a large pothole causing my brake levers to slide down and lock up my wheels. I then opened my brakes as far as they would go and tried to pull my levers back up by hand. This caused a huge gap to open between myself and the field. I tried to catch back on for about 5 miles after that and almost made contact with the field right before they turned and headed into the headwind…at this point, my goose was cooked. With the words of Steve Mlujek ringing in my ears I just kept riding, picking off groups in front of me. I picked up Rob Foshag for awhile and then Papa T came up to us and Tony and I rode away into the sunset. Later we caught another group containing Jason Stevenson and the three of us rode together until the end. Our last lap featured a hold up by a train (first time that has ever happened to me), a Papa T attack, and an attack from myself. We rode to the line in the order of me, Tony, then Jason…yes we had to work the Essex Brass boy over.

I ended up 24th overall…but there is something to be said for just finishing this race. I can honestly say this was the LEAST fun I’ve had racing Cone in the last three years. I had written goal of finishing in the top 5 this season. Needless to say, this goal was not obtained.

The “Who cares, I’m flying Award” goes to Greg Christen of West Coast Riders, for beating three pros on his wheel and taking the win. Way to go, you were flying.
Posted by Timothy Finkelstein at 7:26 PM No comments: