The Dybo Memoirs: Some inspirational thoughts on the eve of the Rockford Criterium

I was first told this story after DNFing for the first time ever four years ago at the Rockford Crit. Although it may not of been what I wanted to hear at the time, it essentially is something that resonates in my head permanently whenever a race requires you to dig deep mentally and physically. Sit back, kick your feet up, and enjoy this story that every bike racer needs to hear. 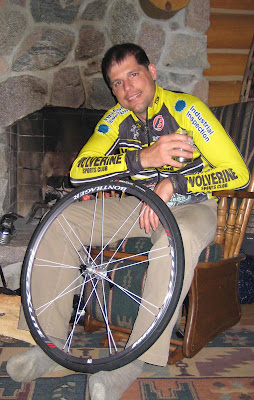 Long ago, when I was still a cat. 3 racer, I had a tendency to get dropped a lot. I was up at Sugarloaf Mountain and got dropped from the field, causing me to DNF. Man, I was freaking tired, defeated, and frustrated. As I was sulking in my despair, I heard a voice over my shoulder yell, “Dybowski…get in the trailer, I want to talk to you”. The voice was none other than one of Michigan’s most accomplished riders, Mr. Claire Young. I walked in the trailer and he told me to sit down. Claire proceeded to pull out the biggest freaking radish I had ever seen. He began to brag to me that he had grown it himself in his own garden. He then started slicing it up and eating it. While chomping on this big freaking radish, he offered some to me. As he reached to hand me some, he said “you know what your problem is Dybowski?...you don’t know how to suffer…you keep getting dropped because you don’t now how to suffer…learn to suffer.”

Ray has told me this numerous times. “You don’t know how to suffer Finkel”= its tough love but it is important to hear. As I roll to the start line tomorrow of what is arguably the toughest Crit Michigan has to offer, I intend to suffer.
Posted by Timothy Finkelstein at 8:05 AM 1 comment:

And That’s Bike Racing 4 U!

Not sure if I’ve mentioned it before, but the summertime is great! The suits that pay me and enable me to sustain my lifestyle say that I don’t need to report to work for about 11 weeks, and they continue to send me a paycheck. So what do I do with all this time? In the years past I’ve always ridden my bike copious amounts but it was always coupled with disc golf, late night long boarding sessions, lots of oat soda, and insufficient rest…basically the rock star style of burning the candle at both ends. Last summer as I purchased my first home, seemed to be the summer of tinkering around the house. However, this season I have committed to living the illusive lifestyle of a pro cyclist. My first week of summer vacation was spent by riding twice a day (AM structured workout, PM group rides). In addition, my diet, my rest, and all ancillary activities outside of riding have been specifically calculated to assure I go into each race prepared.

Yesterday I hit the track early for about 2 hours and the headed out to Waterford Hills for some midweek head to head training combat. A break went on the third lap of a 2-hour race. Initially I was not in it, but after accessing its horsepower and potential for success I quickly made the decision to bridge to it…and we were off for two hours of pacelining breakaway fun. Initially, I had one of my teammates, John Coates, in attendance with me but he was unable to hang on the entire duration. Outnumbered by Essex boys, and assured there was no way the break was getting caught, I conceded to conserve and skip some pulls in an effort for fresh legs at the finish. As they announced the final lap, I rolled across the line eager to see how the race will play out and to test my sprinting legs. However, much to my dismay, as I went into the first turn of the final lap I looked down and quickly realized I had a puncture in my rear tubular. After two hours of effort, my race was over with one lap to go. I considered rolling it in on the flat but the race only pays three deep, and while my pride is large, the price tag on wrecking a set of race wheels in the name of finishing is even larger. I’ve said it before, sometimes things just don’t work out the way you planned and that’s bike racing for you…just another reason why we all keep returning to the start line.
Posted by Timothy Finkelstein at 7:43 AM 1 comment:

It may have not been Superior, but it wasn’t too shabby! 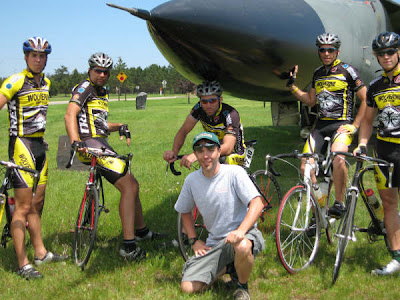 While the rest of my teammates were making memories on the road during their venture to Superior Bike Fest, I was in Traverse City this past weekend for a wedding. 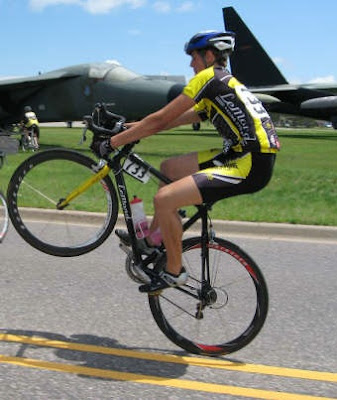 On paper, to those who know me, the weekend could present itself as a Finkelstein Personal Hell Prison. However, I must say it proved to be quite the contrary. After my hectic day with the 3-5 year olds, we arrived in Traverse City Thursday evening only to be greeted by the luxurious amenities that our seaside condo had to offer.

Being the supportive, patient, and understanding person that Angela is, she allowed me to bring both my road bike as well as a mountain bike in an effort to alleviate the intolerable anxieties that would have been created had I not rode for four days.

All in all, I was able to squeeze in 18 hours of riding over the four-day period on the picturesque landscapes of Mission Bay Peninsula as well as the Vasa Trail.

I’m not much of a wedding type of person. I find the cliché unoriginal rituals to be exhausting and intolerable. However, I have to say that this wedding was one of the most beautiful, genuine, and original weddings I have ever been to. In fact, it was the first wedding I have attended that when I looked around, I thought to myself, I wouldn’t mind all of this for myself. 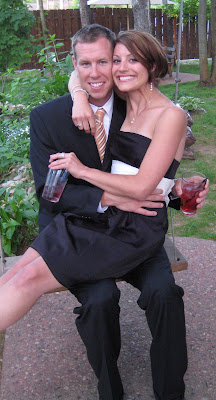 So while I was not in attendance at Superior Bike Fest, the weekend still proved that sometimes there are events in people’s lives that take precedence over bike racing and that are well worth it in the long run. I was able to bond with Angela’s family more and was able to truly relax and get some great miles and smiles in.
Posted by Timothy Finkelstein at 12:18 PM 5 comments: