6WC: Less can be More 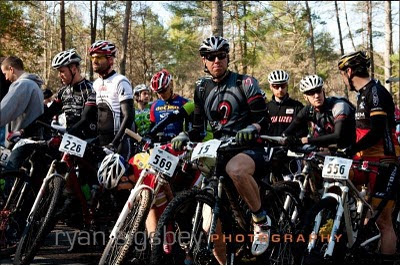 Why do we travel for hours in search of venues to test our mental and physical fortitude and essentially beat the crap out of ourselves for little to no payout other than the intrinsic satisfaction along with the mediocre amount of half-hearted props given to us by our dysfunctional sub-culture? After years of searching for this ever illusive answer, I have given up. I'm simply settling with the idea of nothing more than that I just like it more than most any other things I've done in my life. So nonetheless, Six Hours of Warrior Creek in North Carolina served once again as a perfect medium for my sadistic conquests.

BMCC pulled off another great race boasting a sold out field in some of the most flowing trail I have ever ridden. This race comes sealed with the Finkelstein approval of must-do races for the fellow fat tire endurance junkie.

Last year I did this race on a geared bike and received a lesson in humility and perseverance when I flatted on my last lap just as I was coming up on the first place rider Nathan Wyatt. I ended up with a frustrated 3rd place in the mens open category. However, these endurance events have always held the metaphorical life significance of the idea of moving forward.

"Anyone can plan to win a fight, it's what you do after get clocked in the jaw the first time that matters" -Mike Tyson

Although I like to pretend otherwise, I am a teacher by profession and a cyclist by hobby. Lately things have been looking grim in the world of educational funding, especially in Michigan Special Education. We recently found out that we will be taking a cut in our contracts in the years to follow. This is coupled with the even more powerful underlying threat that we may not even have jobs in the near future. This ominous horizon has many of my coworkers in an emotional uproar as this news significantly threatens their comfort of life they have strived for. Although I have not allowed this problem to effect my well-being too much the anxiety of others I have been surrounded by has been wearing thin on my nerves. Perhaps I am coming from what some may view as an ignorant stance, but this funding problem seems to be a community issue that we are choosing to make a personal problem. Without going on too much of a rant, I'm simply saying that I'm choosing to not let money affect my happiness. I like to dwell on what feels real to me, like beating the crap out of myself at a 6 hour mountain bike race.

I mention these above frustrations because these were just some of the thoughts streaming through my head as I made the 11 hour trek down to North Carolina. Also, I feel it aligns itself nicely with this "less is more" theme I'm going for this season. Over the years, I've learned that your mental race fuel is just as important as your physical fuel.

In an effort to scale my velo-bill back this season to allocate more money toward my main event this year: getting married, I decided to only build up a single speed mountain bike. My motivation to do this was prompted by nothing more than the idea that the most fun I had on a bike last season was on one gear. 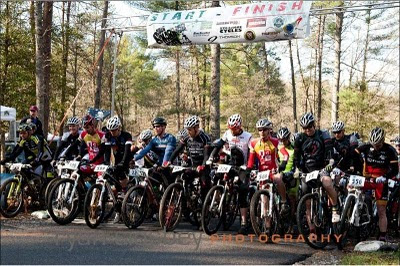 There are certain stigmas that have attached themselves to the SS world. Some may call it an excuse bike, or a purist, maybe even a bad ass. Some may insist that you better adhere to a healthy liquid diet of oat sodas and barely if you want to line up with one gear. I've heard others describe it as a way to be less competitive and strip away the egotistical motives of the sport. Many cling to the idea of resisting industry innovation, although those same people will line up with a sub twenty pound 29er, a steed that was non-existent mere years ago. Needless to say, the single speed crowd can be a little territorial. There are many egg shells you that you may be required to tread lightly on as well as toes you will want to avoid. However, regardless of what you may lay claim to, when you line up to race a bicycle you do it to try and do your best.

For me, it's all bike racing...whether it be skinny tires, gears, fat tires, monocogs, pavement, dirt, or track. To me, it's all the business of turning the cranks and it's all fun. 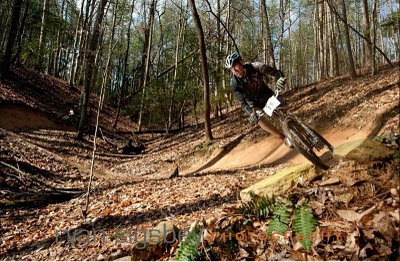 I'm not going to get too into the specifics of the race. I rode my bike as fast as I could in the woods for nearly six hours. On the first lap, I crashed three times. First I lost my glasses. The second crash, I broke my shoe necessitating a shoe change in the pit before the next lap. And on the third lap I took a branch to the chest that made me feel like I broke a few ribs.

A few days before this race started, the promotor published a quote that resonated with me. I felt it applicable to not only my racing but also the situation that is going on at work lately.

"Once you replace negative thoughts with positive ones...you will start having positive results" -Willie Nelson

I was not feeling too peppy or confident after my multiple crashes, although I was still sitting in the lead. On lap four I found myself deep in a valley of self-doubt and low energy. Just as I started to settle into a comfort pace. The second place rider Luke Sagur rolled up on me. We chatted for awhile and I could tell his energy was much higher than mine so I let him pass and roll away from me. On my next pit, my support crew informed me that the third place rider, Tim Anderson, was a mere three minutes back from me. I began to fear the idea that I may lose a podium spot if I don't pick up my pace. I started to think about the above quote. Despite physical pain I dug deep into my emotional reserve tank and my pace began to pick up. By the end of that lap I had overtook Luke and began solidifying my first place position.

In the end I managed to put about 8 minutes on Luke and wound up first place in the single speed category. I must also admit that I did come equipped to this race with a secret motive; to win the overall on a single speed. This didn't happen but I did manage to take third overall.

It's pretty hard to spend that much time in the saddle on a mountain bike, racing hundreds of other people, without any dramatic happenings. 2011's 6WC was no exception to this idea. In the end, I am thankful to of had another sadistic opportunity to practice painful perseverance. More importantly, I give thanks for the reinforcing experience that less can often mean more.

Thanks for reading.
Posted by Timothy Finkelstein at 1:40 PM